So it’s a little late (or a little early, what is time, anyway?), but in celebration of reaching 1k views on WEBTOON, I’m gonna go ahead and open The Alchemist’s Chronicle Discord server. Here’s the link for that:

A quick note: you will need to verify that you’re a human when you join. It’s literally easy as clicking a check box, though, don’t worry!

Things you can do:

The community poll will remain open for those who want to vote for a forum/Facebook group, but given the results were 90% for a Discord, I think that’s what folks want.

Thanks as usual for the support!

Between Webtoon, Tapas, and this site, we’ve reached over 50 individual subscribers! This is amazing news, and thank you all for this support.

In celebration, we want to open some type of community for us to discuss the comic and other topics. What format will this take? Well, that’s up for you to decide. I’ve set up a poll so that you can decide where the community will live. We don’t expect everyone on the site to participate, but this should be fun!

I’ll keep this poll up for 2 weeks, and will update y’all on how the responses shake out.

Thanks, and have a happy New Year! 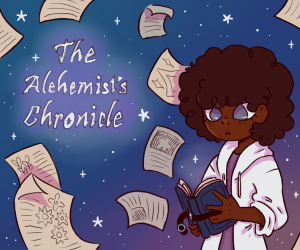 The Alchemist’s Chronicle is on WEBTOON!

As I insinuated last week, The Alchemist’s Chronicle made its official launch on WEBTOON today! Be sure to subscribe and share it around! If you’re a Tapas fan, we also have a mirror on there.

There’s other news! We’re looking at making a Discord server. If any of y’all have experience with Discord communities/moderation, comment below, or email me at admin@alchemistschronicle.com with any tips and tricks you have!

Finally, if you have any extra cash, consider supporting our Patreon! You’ll get additional behind-the-scenes content, alternate comics, and the chance to add your character to the comic! Fun! If you’d prefer a small one time donations, we also have a Ko-fi. All funds go to getting pages out faster, and additional digital content like wallpapers.

Thanks for your support! It means a lot!

Welcome to the The Alchemist’s Chronicle website! You might notice it’s a bit empty here. That’s because I’m still working on the comic. But I had a free domain credit and basic HTML and CSS skills, so why not set up a website real quick?

The Alchemist’s Chronicle is a story about a man named Aren who finds an unusual method of escape from his weary, oppressed life via a magical book that whisks him off to another world. There, Aren finds himself trying to follow in the footsteps of the world’s last alchemist and attempts to craft an item that can save the world from a malevolent force even stronger than the mythological gods. Along the way, he begins to face his demons, appreciate his worth, and grow as a person. But can one human (and his formerly divine friends) stand up against a literal god-killer?

A fair warning: this story touches a lot on LGBT+, POC, and mental health issues. This is a generally light-hearted story, but overcoming trauma is a major theme. Don’t want to make a big deal about that, but it is what it is, and I’d rather folks know what they’re getting into.

Enjoy the comic (or just the post, depending on when you read this)!

A troubled young man finds a magical book that offers him an escape from his dreary life. But taking this escape entangles him in an even greater conflict between the gods of myth and a force that can destroy all of reality itself.

Support us for Free!